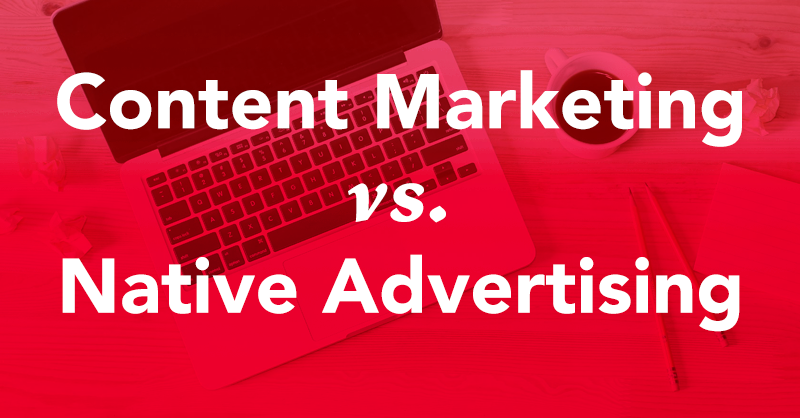 The landscape of marketing has collided head on with the world of publishing in a big way. Two outgrowths of this head-on collision are content marketing and native advertising. Although these fields stem from a similar vertical and have some commonalities, they are distinct in subtle yet important ways.

Especially for organizations hoping to evaluate each of these unique options and to determine which approach best fits their marketing needs and brand objectives having a backwards-and-forwards understanding of how these two differ is key.

My very last #InsiderChat featured two friends and experts in the fields of native ads and content respectively: Melanie Diezel is a consultant that has worked in native advertising for influential publications such as The New York Times, Time Magazine and The Huffington Post and Ted Hart Karczewski is a content marketing manager for Skyword, also a writer for Fast Company and others.

In this chat they shed light on the complicated and often contentious discussion surrounding the differences between native advertising and content marketing.

Q1: Could you define native advertising & what key elements comprise the discipline?

Native advertising can be tough to describe because often it is intentionally created to be hard to detect. In addition, the line between native and actual content has been often, well, contentious.

Although native has often gotten a bad rap when it is performed incorrectly or unethically, at it’s heart native advertising can provide real value to both readers and advertisers. To illustrate this benefit, I like how Joe Gelman, a member of the Honigman Media team, simply put it:

The reason native is great for consumers is because traditional publications will always need ads to support their content. Native advertising simply allows advertiser and publisher to partner to make a more pleasant experience for the consumer.

Q2: Could you define content marketing & what key elements comprise the discipline?

Content marketing is something that is discussed so heavily on this blog that I think it’s best to dive in a bit deeper here.

The more interesting part of this question is how we can understand the upsides and downsides of content marketing in relation to the other topic at hand – native advertising. Ted calls out the key differentiator with an elegantly apt analogy.

A2: Building an audience is hard, it takes time and money. But just like buying a home vs. renting, hard work pays off. #InsiderChat

Essentially, with either discipline the ultimate goal is to build an audience and cement value. However, the key trade-off is this idea of long vs. short-term boost. Since you don’t fully own your native content you might experience a boost, but it’s hard to convert that push into lasting value.

With content marketing, getting the ball rolling is tougher from the outset, but each incremental push in value is brand equity you fully own and can build off of down the road.

Q3: Why is it essential to grasp the distinction between these 2 marketing approaches?

The importance of distinguishing between these two disciplines is due to a host of factors. However, I was curious to see what people identified as the core, essential reason. Melanie Diezel had a fantastic call-out that nailed this issue (and the divide between these two strategies) right to the heart.

@BrianHonigman A3: CM gives you more freedom, since it's often your platform. Native requires an adjustment of tone, aesthetic #insiderchat

Native advertising is really fantastic because it helps what would otherwise be an ad, blend into its surroundings while still delivering on increased exposure and good will. The problem though (or more accurately, the tradeoff) is that this blending in often requires compromising on aesthetic and tone.

Sometimes this trade-off can be mitigated by proper choice of partner publications, and very often any concessions are more than made up for by the spike in reach.

Q4: What are the key differences between native advertising & content marketing?

We already established just how important it is to differentiate between content marketing and native advertising, so now let’s dive into the fundamental differences between these two approaches.

A4: Content mrktng, when using it to build audience, has to be ongoing. You’re at it every day, like a digital pub, or you lose #InsiderChat

This tweet from Ted really speaks to the most substantive point of departure, because his answer lends insight into how either discipline effects the effort required to make either strategy work.

Essentially, native advertising can be managed as an isolated project by an employee with other responsibilities; content marketing on the other hand, will probably require a dedicated team or at least one committed owner.

Understanding the resources needed, and managing expectations for payoff life-cycle, will be crucial when it comes to gauging the success of any content initiative.

Q5: What are the main similarities between native advertising & content marketing?

Q5: What are the main similarities between native advertising & content marketing? #InsiderChat pic.twitter.com/6Tmo3VIYyw

Although understanding the difference between these two disciplines is very important, it is also necessary to note where they clearly align with each other. Having this awareness will help you better manage these often complimentary fields and decide when each is most appropriate for the business goal at hand.

@BrianHonigman A5: Both need to be high quality. Both should be measurable. Both need to keep the audience in mind! #insiderchat

Melanie’s callout here is often either forgotten, or (even worse) remembered and just not followed. Both of these strategies only work by generating goodwill and having that positive feeling associated with your brand or organization. No goodwill, no success.

The content has to please your audience or it is nothing more than really expensive bragging. Whether this content lives on a publication outside or inside your domain of ownership is secondary. Always remember that audience comes first.

Q6: What challenges do marketers face with both native advertising & content marketing?

When it comes to this question, I thought I’d share my own answer to frame the problem as I see it. This runs parallel to an issue I was harping on last section. Namely, brands seem to have this fundamental instinct for promotion sans substance.

That might have worked in the old framework of advertising, but marketing today (specifically in the capacity we’re discussing) absolutely cannot be thinly disguised self-promotion.

People’s BS radars are incredibly sensitive, and whether it’s on your channel or someone else’s, they will root out a “big, hidden, crappy ad” and then tear it to shreds just like a bloodhound.

A6: The learning curve. It takes time to master these techniques, and not all content marketers have that luxury. #InsiderChat

I really like how Jacob Warwick (who has contributed to this blog before), framed the full scope of the problem.

Overcoming the “corporate bragging” instinct will not be easy and will not happen overnight. Companies looking to pursue content-driven strategies will have to learn that being content-driven really means being value-driven.

Providing value generously and earning the right to promote is the only way to succeed in either content marketing or native advertising.

Q7: Could you share examples of successful campaigns from each marketing discipline?

Q7: Could you share examples of successful campaigns from each marketing discipline? #InsiderChat pic.twitter.com/SCGKlVLJF7

@BrianHonigman A7: Netflix + NYT is classic example for native (I wrote this one!) https://t.co/66bvJW476l #insiderchat

Q8: What’s the next step to take action from this chat & start investing in our own campaigns?

Q8: What's the next step to take action from this chat & start investing in our own campaigns? #InsiderChat pic.twitter.com/6VrZAmo5xZ

Looking back on this chat, I hope you’ve gotten a clearer picture of how content marketing and native advertising differ, while also getting a true idea of how they are similar.

Now the question begging to be asked is how to move forward. I wish I could give you a one-size-fits-all answer, but there are simply too many variables to consider to give general advice.

A8: Once you’ve got that figure out, I believe content is the starting point, + native allows you to reach/grow audience #InsiderChat

With that being said, I believe Ted gives good, broad direction here. In essence, what you should really be looking to grow is your owned content and presence, which is firmly the domain of content marketing.

However, once you have some traction, you can put the pedal to the medal and accelerate growth by supplementing your efforts with strategic native advertising partnerships. The key difference between these two fields is summed up in this simple analogy: